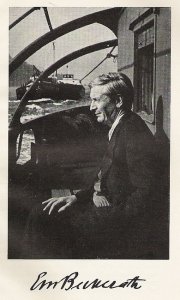 Together with Walter Eucken, Franz Böhm and Hans Großmann-Doerth Erwin von Beckerath belongs to the representatives of the ordo-liberalism. Furthermore he was member of class IV of the Academy for German Right that was directed by Jens Jessen. Within this class he managed the study group “Political Economy” that was stopped by the Third Reich in March 1943 as “not war important”. Inofficially this study group was continued under the name “study group Erwin von Beckerath” that was also called in the history “Third Freiburg Circle”. Its members were more or less clearly connected with the Confessing Church of Dietrich Bonhoeffer. From 1948 until his death Erwin von Beckerath was chairman of the scientific advisory board at the Federal Ministry of Economics, that took care for a certain continuity in the tradition of the “study group Erwin von Beckerath”. He teached political and economical sciences in Cologne, Bonn and Basel/Switzerland. The following works belong to his most renown ones: ”The prussian class tax and the history of its reform until 1851”; Diss., Leipzig 1912, “The seaport policy of the german railway und the raw product supply”; Habil. Berlin 1918, “System and growth of the fascistic state”, Berlin 1927, “Heinrich Dietzel as a national economist and socialist”, Bonn 1944, “Economy questions of the free world”; Frankfort 1957, “Lynkeus. Forms and problems of economy and policy”; Tübingen 1962, “Introduction into the political economy”; together with Josef Heinz Müller; 6th edition, 1970.