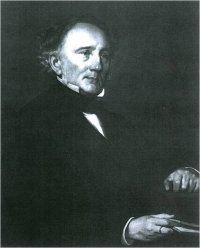 Hermann von Beckerath
* December 13, 1812, † May 12, 1870 in Krefeld, was a banker, member of parliament of the German National Assembly and lateron finance minister. 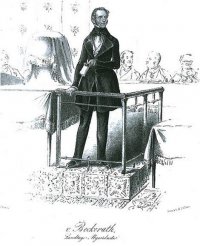 Hermann von Beckerath grew up in modest but guarded conditions of life. In the age of 14 he became an apprentice in a Krefeld private bank and started an amazing career due to his extraordinary talents that were promoted by a preacher of the local Mennonit parish and a parson of the reformed church. For the present the career culminated in the fact that he advanced to a joint proprietor of the bank just in the age of 31 years. In 1838 he founded an own bank under the name “von Beckerath-Heilmann” which continued to be successful until the end of his life. Hermann had interest in music and literature and was always engaged with philosophical, theological, historical and economical questions. He became a well respected and wealthy citizen of the town, was nominated for a Kommerzienrat and was president of the chamber of commerce Krefeld and the German Trading Association. He was married and had two daughters.

Before and during the development of his own bank von Beckerath began to start political activities that concentrated on local functions first but extended on the whole state. Krefeld belonged to Prussia from 1702 on. As a liberal politician von Beckerath became am member of the 7th Rhinish Provincial Parliament in Prussia in 1843. Immediately he belonged to the most active MP’s and stood up for the introduction of democratic structures and fundamental rights with his brilliant rethoric. Among other things he claimed for the equalization of the jewish fellow-citizens. In 1847 he became member of the “United County Parliament” for the entire Prussia that was established meanwhile and from 1849 to 1858 he was member of the “Prussian Parliament”. 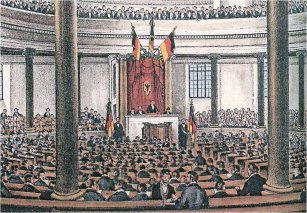 The peak of his political life was reached when after the revolutionary occurrences of March 1848 a parliament came together in the Frankfort Pauls Church which consisted of 585 members from all German countries including Austria. It should create a base for a free and united Germany. In Krefeld Hermann von Beckerath was known as a liberal politician and he was popular enough and supported by the confidence of other political groups to be elected for a member of this national assembly as a representative of the city of Krefeld.

Like other representatives of the rhinish liberalism he stood up for a constitutional monarchy with binding of the monarch to the fundamental and liberty rights of the nation. Focus was the axiom of equalization, the freedom of speech and writing, the liberty of the press, the religious liberty and the universal suffrage. He aspired to the development of a german confederation with the Prussian king as the german emperor. His outstanding faculties of formulation and speech made him to a prominent member of the parliament. In August 1848 a “provisional cabinet” with Fürst Karl von Leiningen as Prime Minister. Hermann von Beckerath was called to join this cabinet and assumed the “Ministry of Finances”. When in March 1849 the Frankfort parliament had determined a constitution and had elected king Friedrich Wilhelm IV of Prussia for the “Emperor of the Germans” a delegation of the parliament offered to him the German emperor crown. Hermann von Beckerath whose advice was often asked by the king, tried to win him by means of letters and many talks in Berlin to accept the crown but in vain. The king refused the emperors crown and the determined constitution. In May the temporary cabinet resigned. The goal of life of Hermann von Beckerath, the unification of Germany to a federal state on the base of a constitutional monarchy with a constitution preserving the fundamental and liberty rights, had miscarried. 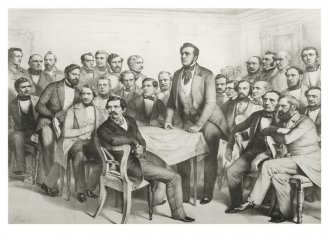 From 1863 on von Beckerath withdrawed more and more from his political activities and devoted to literary and philosophic studies. In May 1870 he died. The family is still keeping the memory of this outstanding man.