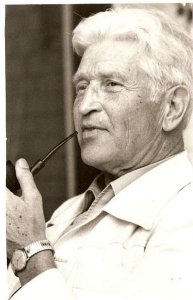 Rudolf von Beckerath was originated from a family of artists. Grandfather Rudolf was a friend of the composer Johannes Brahms, his father Willy was a painter and musician, his mother a piano player. Willy von Beckerath is still well known for the famous paintings of Brahms he made. The house of his grand-parents Rudolf and Laura born Crous was and is situated in Rüdesheim on the river Rhine and there they played music with Brahms quite often. In the year of his birth his parents moved to Hamburg where Rudolf grew up, went to school und first decided for the profession of a technical engineer.

Under the impression of many relicts of the north-german organ builders, particularly those of Arp Schnittger, he terminated his apprenticeship and decided to learn the profession of an organ builder. As a preparing education he went to the School of Arts in Hamburg in order to learn the skills of an arts- and furniture builder. Along this he learned the theoretical basics of the organ manufacturing in a self study. In the cellar of his parents house he built a small house organ that was used in house concerts and on occasion of a radio concert.

For the final education he went to France and following a recommendation of Hans Henny Jahn he joined the company Victor Gonzales in Chatillon-sous-Bagneux near Paris in 1929, since they were still producing mechanical action windchests.

He wrote: “They were experts in building mechanical key action. Although a change from this way of construction came up at that time, the skills were still present…… The old tracker action, the fixed connection between keyboard and pipe pitches through angles and shafts, worked not only without time delay. It did much more than this, it allowed to influence the initial swing process by means of a differenced type.

After almost 2,5 years of education Rudolf changed to Frobenius & Co. in Lyngby near Copenhagen/Denmark as an intonateur. During this time he was involved in the construction and installation of the grand organ in the Frauenkirche in Copenhagen and worked self-responsible on this project.

1931 he was called back by the company in Paris. He became share holder and Gonzales took over a patent of him.

He wrote: “Therefore the direction of the company belonged to my duties. I was widely envolved in the extension of the relatively young company. So the manufacturing of labial and tongue pipes was established by me. Before that time they were delivered by suppliers. A locksmith’s workshop was added and improved working methods were integrated. In addition to that I managed self-responsible work in design and construction. When the political problems became more and more visual in 1935 and german companies in France or french companies with german shareholders risked boycotts with the result of financial loss I decided to solve my contractual relation with the company on base of a mutual agreement.

In 1936 Rudolf von Beckerath came back to Germany and was active as a free lance consultant for organ manufacturing in Hamburg. The job included the planning, construction and the management of manufacturing, conversion and reconstruction of organs. From 1938 on he was also busy as an official expert for organs and bells.

After war service and captivity he returned to his home town Munich first, where his family had moved meanwhile. There he worked at the planning and consultation for the new organ of the Hofkapelle in the Munich Residenz and 1946 he received the order from the county church Hanover to register all existing monument organs in their region, to measure and to describe them.

At the same time he tried to do all efforts to become an independent organ manufacturer. He returned to Hamburg. To become independent he had to pass his examination for foreman that did not exist in France but was necessary in Germany. 1949 he finally could establish his own company.

Just the first big organ for the Hamburg music hall with 59 records, 4 keyboards, action windchest and mechanical key action was a remarkable and sensational new construction in 1951. 1955 Rudolf von Beckerath manufactured the organ in the St. Petri church Hamburg with 4724 pipes. Other organs followed.

A geographic extension took place in 1957 when he built the 4 keyboard, pure mechanical organ in Cleveland / USA which was a novum there. The biggest instrument was produced in 1960 with 78 records and 5 keyboards, also with mechanical key action for Montreal / Canada. (The modern technology and electronics were previewed for the record control, so Rudolf said).

Today Beckerath-organs can be found in many countries, outside USA and Canada in Australia (Sydney), Croatia (Dubrovnik), South Africa (Cape Town), Japan (Kyoto, Tokyo and other cities), in Poland (Nova Huto), in India (Mumbay), in Russia (Krasnodar) and in France (Paris).

A further, important and interesting work for him was the restauration of old organs, for example amongst others the famous Arp-Schnitger organ in Steinkirchen near Hamburg.

Rudolf von Beckerath died in 1976. The company was directed among others by old staff members, at first particularly by his “organ son” Timm Sckopp. Today german churches are not in the position anymore to buy new organs due to a lack of money. In opposite to this the export business is booming and makes 90 % of all orders.

The organ builder Rudolf von Beckerath wrote among other things about the historical development: “The organ in the northeuropean region passed a special way of development after the reformation. Under the influence of the protestant chorale which was impressed by the Lutherism it developed from the servicing function of an incidental instrument to an independent pronounciator of god’s word. I believe that we have to understand the chorus works of Bach, his predecessors, contemporaries and also his followers in this way.

And about the organ at an other place:”It is difficult to value the sound since it is naturally influenced by the taste. But may be the basic questions concerning the sound can be outlined as follows: Let each pipe speak naturally and free as it can and will do following the choosen measure and form. The mutual arrangement of the pipe rows implies well-reasoned measures of proportions and rows. When planning this is the true creative work of the organ builder. If he has a lucky hand the answer will be that what people are fascinated of since centuries: a shining brilliancy, incomparable harmony, dignity and majesty of the sound”.

It is appreciated by todays experts that Rudolf von Beckerath had the mentioned creative talent. We may be proud of this namesake who was a master in the art of organ building.

His former company in Hamburg is still keeping the name of its founder.